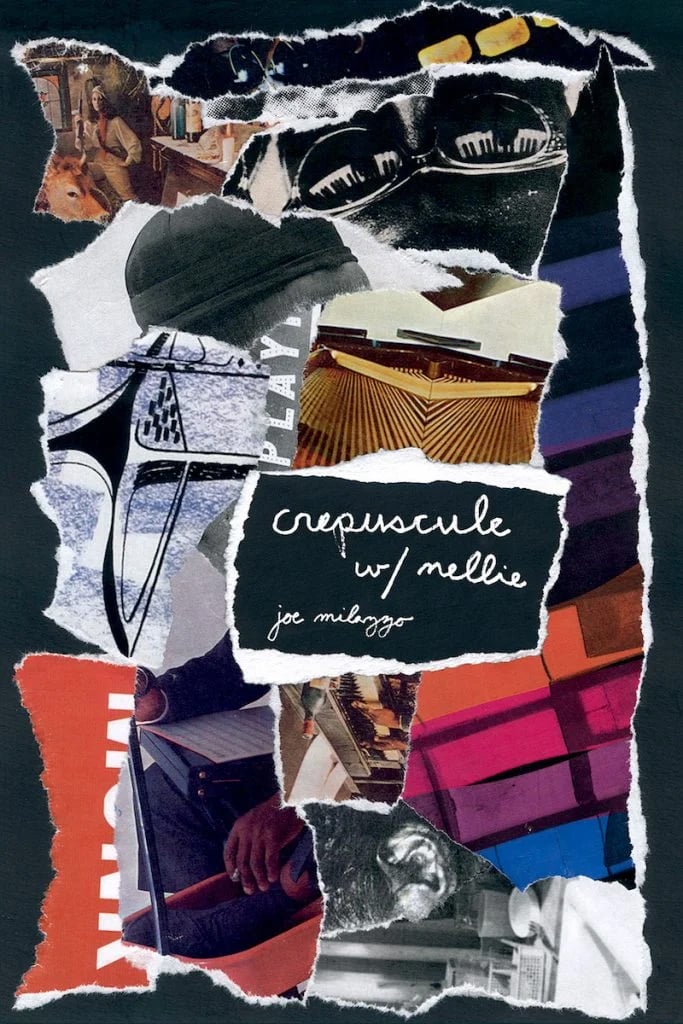 A work of speculative historical fiction that depicts the lives of Thelonious Monk, his wife Nellie, and his confidant and patron the Baroness Pannonica de Koenigswarter, Joe Milazzo’s Crepuscule W/ Nellie does not aim for documentary authenticity. Neither is it an ekphrastic experiment meant to mimic Monk’s unclassifiable brilliance, with his signature dissonant harmonies and angular melodic twists. Instead, Crepuscule W/ Nellie erects its narrative architecture at that impossible intersection where fandom (and its obsessions) begins and love — with all its complications — ends.

“The challenge in writing on behalf of Joe Milazzo’s fiction is finding the language to convey how special it is, but let us begin with audacious and fearless, lyrical and brilliant, superbly imaginative and assuredly accomplished — one of tomorrow’s great novelists on the cusp of his moment.” — Steve Erickson

“Crepuscule w/ Nellie is dilucule w/ Joe: Milazzo’s book woke me up and shook me, by making the new through homage.” — Joshua Cohen

“There are books we read to master and books we read to be mastered by: this book, Crepuscule W/ Nellie, by Joe Milazzo, is of the latter sort, and, if you’re comfortable enough with yourself to let go of your notions of the way things are for the time it takes to read it, this book may well puncture a hole in your notions of the way things ought to be. Ours is the era of the scattered, the angry, the bewildered, the disingenuous. We wear our inattentiveness proudly and insist it be pandered to, or else. Our opinions, whatever, are never less than facts. This novel isn’t an antidote to these ills. It’s a light in the darkness they make. There are those of us who know we need a book like this and those who will know it the moment we see it. I wish profanely that it find us all, and then some, too.” — D. Foy

“Crepuscule With Nellie is a heartfelt and cunning fictional glimpse into the genius of Thelonius Monk, his music, and those closest to him. It is experimental and challenging yet deeply human, a book I keep close and find inspiration in. Joe Milazzo’s talent is evident in how he masterfully handles language and structure. I absolutely love this book.” — Brandon Hobson

“Milazzo dug this lost recording of the Monk/Monk/Pannonica trio — dug as in figured, as in got into, as in exhumed — out that ‘dustbin’ folks talk about. And since the composition called Crepuscule W/ Nellie is this time a story storying history, the good mess Milazzo so expertly messes with alchemizes the linguistic odds-and-ends that make a vernacular both high-falluting and low-down; the factual scraps that member a fiction into a rich speculation; and the individuals ignored so long they must come back to us in books. Our author has given us a fascinating one. Dig it, dig it, dig it.” — Douglas Kearney

“Milazzo’s work inhabits a place much like that between sleep and wakefulness — one is neither conscious nor unconscious, and the mind is free to chart a different terrain, where hallucinations are lucid, rational action is absurd, and the rigid metronome of what we understand as time is unhinged, giving rise to an altogether looser continuum where repetitions, breakdowns, and indeterminate codas are the norm. It seems unnecessary, while perhaps perverse, to make pointed mention of Monk — much less jazz — here. The term ‘jazz’ itself, which fittingly bears no formal etymology, was little used by so-called jazz musicians of Monk’s era. For these musicians, art was tagless. It strikes me that, with this debut novel, Milazzo abides by a similar guiding principle.” — Laton Carter

“A supple weave of textures, voices, influences echoed and then amplified; Joe Milazzo’s Crepuscule W/ Nellie masterfully carries out the serious business of mapping out a collective consciousness in all of its layers, tangles, dense thickets and odd gaps. His subjects are many: creativity and sacrifice, patronage, women caring for men, women caring for each other. The book has its refrains, its passages that suggest impassioned improvisation, its tempo shifts, moments of melodic clarity followed by transitions that seek and struggle and finally—as much like Keith Jarrett as Thelonious Monk—explode into even freer terrain. It’s bold, challenging work that connects Milazzo back to a line of authors, like Faulkner and Joyce, who saw the novel as not just a tale well told but a place to inhabit.” — Mike Heppner

“Joe Milazzo’s Crepuscule W/ Nellie is a blast. So rarely do we get a novel this momentous, challenging, ambitious — Crepuscule W/ Nellie transcends expectation. I’m moved by the fierce acuity of the maximalist prose, never less than adroit and vital as it parses a famous triangle between the maestro, Thelonious Monk, his wife Nellie, and the Bebop Baroness, Pannonica de Koenigswarter, the most storied music patron of the 20th century. Triangulating the infinite personal declensions between struggling black musicians and the white patrons, between the women and their men, Joe Milazzo’s language brilliantly echolocates that essentially American distance, sounding out an American loneliness that is with us still.” — Sesshu Foster

“Joe Milazzo’s Crepuscule W/ Nellie takes as its great and original subject a care-giver’s, literally home-maker’s immensely improvising relation to a creative genius, a demanding, needy, powerful, enigmatic, often disappointing man who was her husband. That is what this long, intimate, painfully American, many-voiced rumination of a novel is about — though also, and indirectly, about much that is implied by its title, which was first that of Thelonious Monk’s shortest major composition, one of my favorites, with its outer, measured clarity and inner, off-balance infinities and shadows. Has Milazzo added the lyrics? I think rather that he has written a deep, interior book about lives that included jazz and everything else. A book that will last.” — Joseph McElroy